The Complete Count Committee is seeking ways to get the word out to all Wake County residents regarding the importance of being counted in the 2010 U.S. Census. As the chair of this committee, Ms. Octavia Rainey is directing special efforts to reach the historically “undercounted” populations: minorities, those with lower incomes, and especially African American males ages 18 to 35.

As part of her efforts to reach these populations Ms. Rainey has established a coalition of 30 ministers to serve as “Soul Census Ambassadors”. Today I represented the city at a pinning ceremony to help publicize the importance of participating in the upcoming Census. 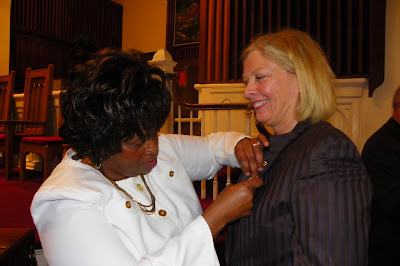 How is the Census data used? This information is used to direct the federal funding for essentials such as hospitals, job training centers, schools, senior centers, transportation and public utility infrastructure and emergency services. The data collected by the census also help determine the number of seats each state has in the U.S. House of Representatives.

The 2010 U.S. Census is being conducted this spring. The 10-question Census forms will be mailed to American residents March 15. April 1 is National Census Day, when everyone who has yet to do so is asked to answer the 10 questions and mail the form in the postage-paid envelop provided. Any personal data that is provided is protected under federal law. If you do not return the form, you may receive a visit from a Census taker who will ask you the questions from the form.