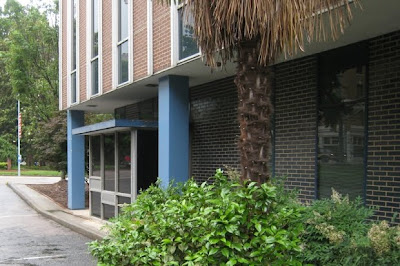 There has been considerable talk recently about the wisdom of keeping the existing Raleigh Municipal Building.

This building has been held high as an example of many things, ranging from a testament to history to a masterful work of art.

I’m not sure that these comments are about the same building that I know, but I would like to address some of the issues associated with the building.

While I agree that Milton Small was a great architect, he was also bound by the constraints of those employing him around 1960.

He completed a number of very handsome modern buildings in Raleigh. However, most agree that this is not one of them. This building is the product of a government that put its’ resources into cheap, utilitarian buildings. The cinder block walls and low ceilings do nothing to foster any kind of nostalgia. And they certainly do not produce the type of environment where anyone would enjoy working. 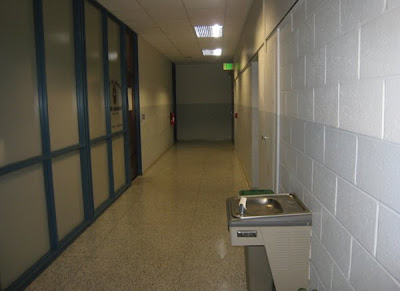 As for its legacy, let’s look at some of the history associated with this building.

During a recent tour, we noticed how many small bathrooms there are scattered throughout this building.

This is because this building was built during a time when there were separate “colored” bathrooms. That’s not exactly a history that I want to honor. 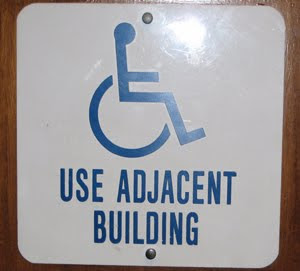 As we can see from this picture, there is not even a handicapped accessible bathroom in the entire building.

What we can do to preserve the true history of this site is to continue to dedicate this location to the men and women who serve and protect our city every day. We can equipt them with the tools they need to do their jobs well.

Traditionally the core of a city evolves on the footprint of previous development. As each succeeding generation adds new elements, the tapestry of the city grows in complexity and richness. New is not always the best answer and buildings have been lost that should have been retained. This was particularly true in the post World War II era.

As a result, over the past 30 years we have become more aware of the history of our cities and concerned with the preservation of work that is significant for historic or architectural reasons. We need to examine every case carefully. But that does not imply that we should simply save everything because it exists. The vibrancy of a city comes from selectively reinventing portions of the urban environment. Sometimes that means renovation and sometimes it means a new project. We must examine the Municipal Building and its site in the context of downtown Raleigh’s evolution.

Nothing in the core of this building meets code – elevators, stairs, bathrooms, ingress/egress, and internal traffic patterns, to name a few. The fire exits are too close and too narrow, and the building is far from handicapped accessible. There is no fresh air intake into the ventilation system. There is asbestos in the flooring, and even the terazzo floors that some have spoken of having value would most likely have to be torn out. The only wood in this building is some wall paneling. 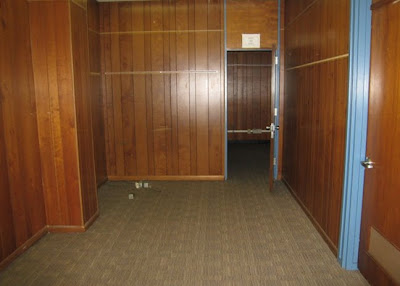 This building has a long list of needs. From just the items that need to be brought to code, we know that the building would have to be gutted, saving only the facade and underlying structure. That’s a pale green project.

Once we are left with the skin of the building, we have a new list of problems.

The walls are solid brick and concrete alternating with windows, presenting a problem when trying to run wires. With the original 1960’s ceilings and light fixtures, we have to run wires through the floors, leading to raised plug and junctions boxes and preventing cubicles. 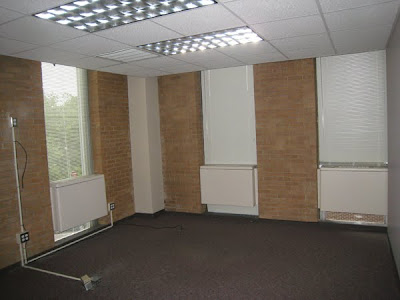 Some rooms have dropped ceilings to accommodate our new technologies. An 8-foot ceiling that you can touch does not produce a good work environment.

Also, the windows are all single pain glass, and therefore, not energy efficient.

It does not meet any of our current energy efficiency standards.

It is not insulated.

To preserve the skin, it would have to have insulated glass installed from the inside and there is some question as to whether the framing can hold the new glass and insulation.

We have already spent millions of dollars to design a new building which will be greener than anything that can be done to this building.

This is without a doubt the best time to build. Interest rates are down, and construction costs are at an all-time low.

Many projects are currently being built at a 30 percent savings. And let’s not forget the 1800 jobs associated with the construction of this new facility.

We want our police and fire departments to use new technology to protect us and stay ahead of problems that the average citizen would not conceive.

Let’s not ask them to do their job with 1960’s equipment.

I don’t think anyone would argue that we are not in need of new facilities for our 911 call center and other city employees. Our 911 Emergency Response Center is woefully inadequate and faces serious facility issues. It benefits our public safety officers to be able to work together and to communicate effectively. While the temporary facility on Six Forks Road is adequate for now, it is not a long-term solution. The police must make countless trips downtown to the courthouse and evidence room. As a small business owner, I understand the importance of having your managers available to interact and meet face-to-face. The most efficient and safe situation is for our police chief, fire chief and city manager to be within close proximity.

The facility and resources that we provide our police and fire fighters says volumes about how we value about them as a community.

In the past, comments have been made that this site on Nash Square would be “wasted” if used for city employees.

The key to good public safety is having great people. Telling these 800 public servants that the value of real estate is more important than they are is a poor way to achieve that goal.

There are still adjustments that need to be made to this project. We are currently looking at the possibility of a scaled down structure. Going back to square one is not a fiscally responsible option because the city has already invested millions of dollars in design and development. The longer we delay, the more it continues to cost the city and taxpayer.

The process of undoing all of the work to date, re-evaluating all of the project parameters, including site selection and acquisition, site approvals, and programmatic distribution and building another (or four more) designs is short sighted and fiscally irresponsible.

We have to look at the big picture and make decisions that will be the best for Raleigh today, and 30 years from now. We should not make a short-term decision for the sake of political expediency. Public safety is the core function of the city. It is our biggest responsibility. We need to look to the future, while honoring our past.

Let’s honor the city workers who have given their careers, and even their lives, to keeping the City of Raleigh safe. Officer Paul Hale was killed in the line of duty in front of Ligon Middle School. I went to the county’s memorial for our fallen officers on May 10. I was the only local elected official there that day. I spoke to Officer Hale’s mother to express my sympathy and to let her know just how much her son’s sacrifice means to us all. She thanked me for the memorial tribute on the wall of the current building to honor her son’s sacrifice. She then said that she wished it was in a better, nicer building because the condition the officers work in says a lot about how the city values them. I was profoundly embarrassed.

Let’s show our community that we are proud of our public safety workers by building them a state-of-the-art building that helps them do their jobs well. Let’s preserve the history of public service at this site by building a public safety center in the heart of downtown where its doors can be open to citizens and visitors alike. Let’s prioritize public safety as crucial to the success of our community, for today and for generations to come.