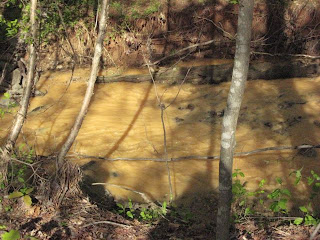 One of the major issues I worked on during my four year term as President of the Greystone Homeowners Association was the pollution of the three Greystone Lakes. These lakes consistently had problems resulting from upstream development – a combination of stormwater runoff and silt leaving construction sites. This increased water flow erodes the creek beds causing excess silt to end up in the lake. (The picture on the left is a creek running under Sawmill Rd into Greystone Lake.) This not only makes the lake too shallow to use but reduces the ability of the lake to function for flood control. Our lakes were also suffering from algae blooms caused by increased nitrogen, partially from lawn fertilization but mainly from sediment imbalance of the lake. Not only were the lakes becoming nonfunctional and ugly, but we had an additional responsibility to the greater community because the Greystones Lakes are the flood control for the low-lying part of Leadmine below the dam.

As a collective group of concerned citizens, our HOA worked hard to get support from the City to address our problem. Many of the neighbors who live adjacent to the lake were aggressive in their attention to the lake and consistently contacted the City during major fluctuations in muddy runoff. Then it is the responsibility of the City to take appropriate action of tracking down the source and either fining the developer or enforcing proper stormwa 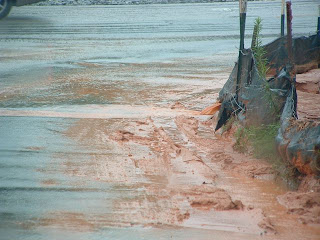 ter controls. After repeated attempts to hold the developers responsible for the damage caused by their construction we learned that even the nominal fines were not available for our (private) use to correct the problem. So the Greystone HOA had pay close to $150,000 to dredge the lake using our HOA dues. This situation continues to inform my position that the City should have stricter stormwater standards which does not place the responsibility for correcting the damage on citizens, but rather on the perpetrators.

Since excessive silt is also a big problem in Falls Lake, we solicited the help of Dean Naujoks, current Neuse Riverkeeper at the time. He was an excellent resource and huge help as we navigated the challenging process of cleaning up the polluted lakes. Dean was very impressed with our neighborhood collective attention to the health of the rivers and lakes, and saw a potential model for citizen watchdogs over local waterways. His years of experience and work with Greystone led to the development of Muddy Water Watch – a program to train citizens as watchdogs for stormwater pollution damaging their lakes. Thanks to Dean for his ongoing support and advocacy for water protection across NC!

“Long before Nancy McFarlane was a city council member, she was a champion (and President) for her community in North Raleigh. She worked tirelessly against development interests that damaged Greystone property values and cost the Greystone community over $100,000 to dredge sediment from the Greystone Lakes coming from upstream development. I was inspired by her work on sediment pollution, which according to EPA is the single largest source of impairment to our nation’s waters. As a result, I created the Muddy Water Watch Project (a spin off of the Get the Dirt Out) in NC—a citizen training program to monitor construction activity– which was praised by EPA in their July 2008 national news letter. Muddy Water Watch has since been expanded to Riverkeeper programs throughout the country and Nancy has continued to challenge development interests on this critically important issue which is threatening Wake County’s two primary drinking water supplies—Falls and Jordan Lakes.” – Dean Naujoks, Yadkin Riverkeeper (formerly Neuse Riverkeeper)