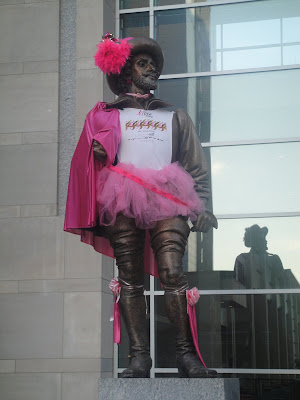 Nancy loves capturing pictures of Sir Walter Raleigh when he’s dressed up for different Raleigh groups or events. Picture above is Sir Walter decorated by the State Firefighters’ COnvention. Picture at left taken by Mayor McFarlane during Komen Triangle NC Race for the Cure on 6/11/09.

The following text is directly from the City of Raleigh press release.
Bruno Lucchesi, the creator of Sir Walter Raleigh’s 11-foot bronze likeness, is the feature of the summer edition of Sculptural Pursuit magazine.

“Bruno Lucchesi is revered as one of the great sculptors and teachers of the late twentieth century… He has depicted the famous, such as Sir Walter Raleigh, Abe Lincoln and Mark Twain…” the article’s author, sculptor David Foster writes.  The nine-page article traces Mr. Lucchesi’s career from his earliest years as an Italian shepherd to his last 51 years as one of the world’s most renowned sculptors of the human form.

Mr. Lucchesi, 83, was commissioned to create the Sir Walter statue in 1975. When the capital city of North Carolina was created in 1792, it was named to honor this dashing Elizabethan figure.

Yet, it was more than a century later that a movement was formed to raise the money to commission the statue.  In 1901, school children contributed pennies, nickels and dimes to create a memorial to this man who was responsible for the first English colony in America and for whom their state capital was named. The children from throughout the state gave generously to the Sir Walter Raleigh Commission and the sum grew substantial, but was not put to its purpose. A goodly portion of the contributions were lost in a Depression-era bank failure. Only $10,228 of the children’s donations remained.

Sporadic and half-hearted attempts to bring the statue into being surfaced and succumbed over the subsequent decades. Finally, the approaching American bicentennial prompted fruitful action.

Along with the commissioning of Mr. Lucchesi to create the statue, corporate sponsors from throughout the state contributed to getting the statue created and dedicated in honor of the nation’s two-hundredth birthday.

Mr. Lucchesi created the statue and cast it in bronze at his home in Pietrasanta, Italy. The statue was dedicated by the governor of North Carolina in Bicentennial Plaza on Dec. 3, 1976, the waning days of the nation’s bicentennial.

Today the statue serves as the Raleigh Convention Center’s sentinel on Salisbury Street.