Nancy is President of NC Water Rights, a grassroots coalition of citizens and buisness people who believe the residents of North Carolina, are the best stewards for our water rather than private firms who use it primarily for their financial benefit. This mission has driven NC Water Rights to join the fight to deny the relicensing of the permit to operate a private hydroelectric dam on the Yadkin River.

Will Alcoa Honor its Contract? Op-Ed by Nancy McFarlane

Alcoa’s public relations specialists have repeatedly stated that the State of North Carolina is attempting to take Alcoa’s private property during the current relicensing process for the Yadkin Hydroelectric Project. But there is no “taking of private property” without just compensation as Alcoa implies. Alcoa has always understood that its license for the Yadkin Project was for a limited number of years. In return for receiving from the federal government—for free—the exclusive license to generate hydropower from the Yadkin River for 50 years, Alcoa agreed to transfer the Project Property at the end of its license if the federal government decided, that in the public’s best interest, someone else should be given the right to generate power from the Yadkin River. If the federal government decides to reclaim the Yadkin Project, Alcoa will be compensated for its property exactly as Alcoa understood and agreed when it originally accepted the Yadkin license in 1958. Now, Alcoa would like the public to believe that it had a different deal. 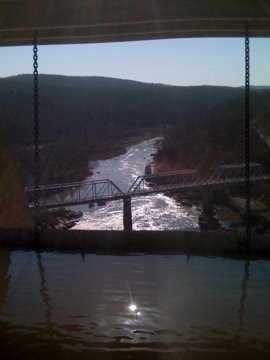 The hydropower potential of the Yadkin River is owned by the public, not Alcoa. For the past 50 years, APGI (Alcoa Power Generating, Inc.) and its predecessors enjoyed the exclusive right to use the water of the Yadkin River to generate electricity under the terms of a license issued by the Federal Energy Regulatory Commission (FERC). That 50-year right to use the publicly-owned power potential of the river to generate electricity has now expired, and Alcoa is continuing to generate electricity under year-to-year “annual licenses” from FERC that allow the project to continue operating while FERC decides whether or not to give Alcoa—for free—another 30- to 50-year license.

In return for the privilege of damming up the Yadkin River and using the public’s resource to generate electricity worth millions, if not billions, of dollars, while inconveniencing its neighbors above and below the dam, Alcoa had to acknowledge that the people own the water and that the Federal Power Act gave the government the right to reclaim the Project at relicensing. The law provides that whatever entity is granted, the federal right to generate hydropower from the Yadkin River has a legal right to Project Property. As a FERC licensee, Alcoa specifically agreed—and is required by federal law—to transfer any Project Property it owns at a price set by federal statute, not by the market, if the federal government decides that someone else should operate that Project after the expiration of Alcoa’s existing license.

Relicensing is supposed to, by law, make sure that the river resources are still being used for the benefit of the public. The guiding assumption behind the Federal Power Act was that the major rivers of the United States belong to the people of the Unites States and no one should be allowed to use those waters solely for their own profits. The river and the benefits of the electricity it generates belong to all of us, as provided by long-standing law.

No license holder of a hydro project has a right to a new license at relicensing. Alcoa, however, would like to have the public believe that because they have already enjoyed the Yadkin license for 50 years, it would be wrong for the federal government to exercise its right to reclaim the Project as provided by law and agreed to by Alcoa. Instead, Alcoa apparently believes that the federal government should just hand over the equivalent of a government subsidy that may be worth billions of dollars, even though the public receives almost nothing in return. Alcoa’s arguments about protecting a “privately-owned business” are really about making sure Alcoa—a privately-owned business—gets a great big government handout.

Federal takeover has to be done at the end of a license. For the Yadkin Project, that means now. The law and Alcoa’s license are very specific about the price to be paid and the process of returning the water to its rightful owner: the public.

Alcoa, in its agreement with the government, acknowledged it had a license to use
Project Property to generate power from the public’s resource for 50 years, at which time the licensed expired. (Project Property boils down to the land under the water and all the other assets necessary to use the river to produce electrical power.) Alcoa, in the agreement, acknowledged that the government could refuse to renew that license. Congress believed that a 50-year license provided sufficient time for an investor to amortize or recover its cost of the project and to receive a fair financial reward for building the dams. A 50-year license provided a specific deadline at which the license would expire and the public would have an opportunity to regain control of their water resources for their own prosperity. It is our right; it is our law. It is corporate spin from Alcoa in arguing that its property is unlawfully being taken. The facts don’t agree.

Statement from the Governor on the Filing of the State’s Motion to Intervene in Alcoa’s Yadkin River Hydroelectric Dam Relicensing – Released April 1, 2009
“The waters of the Yadkin River belong to the people of North Carolina. Fifty years ago, we endorsed Alcoa’s request for a federal license to operate hydroelectric dams on the river because they powered the company’s aluminum smelting works. That facility was a linchpin in the regional economy and created jobs for up to 1,000 North Carolina workers.” said Gov. Perdue. “Today the smelter and the jobs are gone – and so is the reason for the license. I’m asking FERC to enable the recapture of the license so it can be used once again to help create jobs and economic opportunity for the region.”

RALEIGH — The Battle of the Yadkin River is generating almost as much controversy as its waters have generated electrical power. Before it’s settled, this scrap may involve Gov. Beverly Perdue in a process that could lead to a new owner of four hydroelectric facilities that once helped produce a steady supply of aluminum.

For much of the 20th century, Alcoa’s aluminum smelter at Badin in Stanly County was a major regional employer, a mainstay of the economy in the central Yadkin River basin with its 1,000 or so employees producing aluminum and the hydropower that fueled its operation. So when Alcoa Power Generating Inc.’s 50-year license to operate came up for renewal, the company had every expectation of local and state support for a renewal for another half-century.

But that was before a crippling drought in 2008 turned policymakers’ thoughts toward the use of a river that slices through the state’s Piedmont area. It provides recreation and habitat at a series of lakes running south from I-85 to the state border and could be a key resource if the state rethinks how to make sure the central region of the state has enough water.

And that was before it sank in that the aluminum smelter no longer employed its once-large workforce — one reason Alcoa cited in its 1957 petition as an argument in favor of a 50-year license. Or that Alcoa had gotten a big break on sales taxes on its electricity. Or that Alcoa might one day sell its operations to a company outside the state. And it was before local residents began focusing on reports of environmental contamination linked to smelter operations.

For Cabarrus Republican Sen. Fletcher Hartsell, this is a rare opportunity to establish firmer state control over a public resource vital to the region’s prosperity and quality of life: “This could create a partnership to share control of the water and use it for the best interests of the state,” he said. “The real issue is not electricity, but the use of the state’s water.”
continued