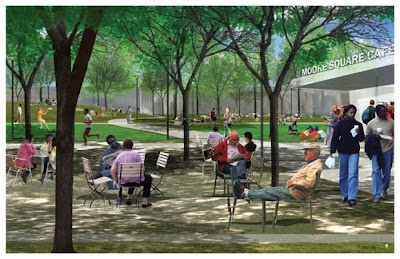 On December 16, the site model for the Preliminary Draft Master Plan for Moore Square will be released! At 5:00 on December 16, at Chavis Community Center, Chris Counts and City Staff will be on hand to unveil the preliminary plan. Chris Counts, of Christopher Counts Studio, was the winner of the Moore Square Redesign Competition. He was done a great job of working with City Staff and gathering public input to form his design. After the site plan is released, there will be a question and answer session.

The feedback from the event will be used to put together the Moore Square Draft Master Plan and Report, to be released in early January.

Hope to see you all there!